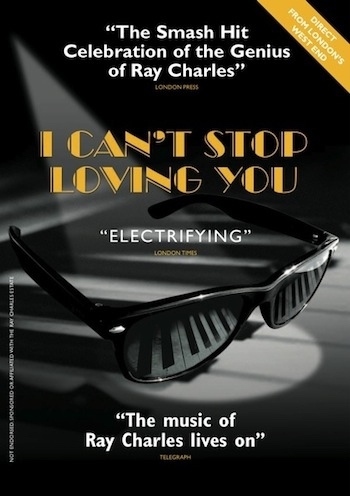 I CAN'T STOP LOVING YOU

Ray Charles was one of the most loved entertainers of the 20th Century, and this show is a tribute to the music he brought to the world’s stage.

The production caused a sensation when it appeared in London’s West End and it has recently completed highly successful European and American tours, playing to sold out crowds with rave reviews.

The show recreates the remarkable music that Ray Charles made his own and delivers a non-stop compilation of timeless hits, from soul to country, blues to gospel, and big band to jazz.

Songs include; I Can’t Stop Loving You, Georgia On My Mind, Hit The Road Jack, You Are My Sunshine, Unchain My Heart, Bye Bye Love, What’d I Say, and many more.

With a full supporting company featuring some of the best soul and blues singers in the world, amazing dancers and a swinging on-stage orchestra, I CANT STOP LOVING YOU is now touring internationally to the highest critical acclaim.

'I can't stop loving this show!'