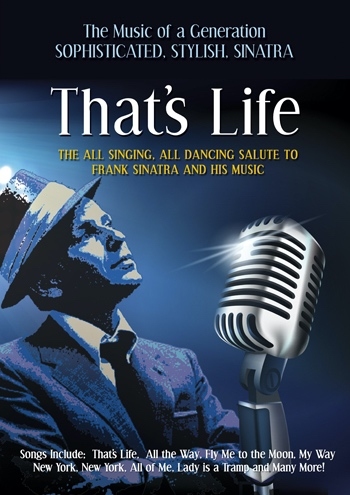 Sinatra and Friends is the smash hit multi media celebration of the music of Frank Sinatra. This glamorous all singing, all dancing production takes you on a breathtaking musical journey through all of Sinatra's greatest songs, together with the number one hits of leading recording artists of the Sinatra era.

The show features the music Sinatra loved best, with a special salute to the showbiz friends he loved the most.

The show has unique film footage of the highlights of Sinatra's career, with rarely seen interviews taking you through the fascinating life and times of one of the worlds greatest entertainers.

You will see film footage of the man behind the legend along with film of Frank 's legendary performances.

You will watch Frank singing on screen with the biggest stars of the era, including Dean Martin, Tony Bennett, Paul Anka, Judy Garland, Ella Fitzgerald and Doris Day.

There are also film highlight of Franks television shows, And never before personal face-to-face interviews revealing the love affair Frank had for his music and career.

Not intended to be impersonators, these talented performers draw you in to themselves and their love for the eras of music and entertainment that Frank was so known for.

This is a full scale multi media musical that celebrates 100 years since Sinatra's birth. The great man may be gone, but his musical legacy lives on in this spectacular hit show.